Posted on January 7, 2012 by AnarchyAngel

January’s meeting had a few kinks but all in all everything went well and we had a few new faces in the crowd. We had some issues with the G+ hangout, but it was our first time and i’m sure it will go smoother the second time around. Then i had video issues while trying to give my LFI attacks demo and had to give a backup demo, but everyone else was awesome.

Darkwind gave his first presentation with dc414 and it was a good one for sure. He showed us some of his modded radio equipment and how to decode all sorts of transmissions, from HAM faxes, pagers, DTMF tones and more being broadcast in the air ways. Talked a little about cell tower emulators and software radios. dw5304 and Klaiviel gave us a run down of how they hacked the new xbox 360 to play ripped games off the HDD in just a few not so easy steps 😛 Then dw5304 have a little demo on resetting passwords on any windows box with just a few key strokes. I gave the last presentation of the night and after my LFI demo fail i was able to give a nice little demo of how the ODiG tool works and how it can aid in pwning networks.

One of the coolest things about the meeting, it was our honor to have Jayson Street join us via G+. We hope to see him at the next meeting. Cmoney couldn’t join us but I was able to snap a few shots here and there which you can view here. The big winner of free dc414 junk was Stephanie, here she is with her winnings: “ALFA usb 802.11n card” 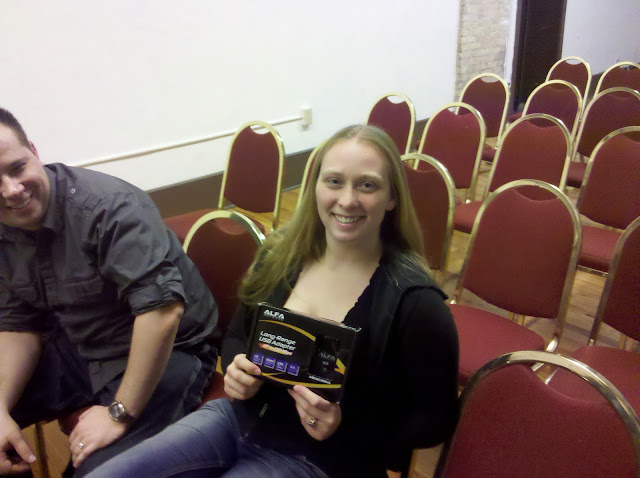