Posted on December 5, 2011 by AnarchyAngel

Decembers meeting was awesome! Vlad gave a great in depth wi-spy demo. He showed us what a Bluetooth file transfer looks like, what microwaves look like and access points looks like, and gave good detail of just what exactly was going on. Before the meeting he asked people to bring in any wireless devices to see what they looked like in wi-spy while operating. dw5304 came packing with a some directional wireless access points, one so powerful it completely took over the entire spectrum that wi-spy displays.

Then i gave my presentation on using sql injections to bypass logins to sites and admin areas. I showed what should be sent to the sql server, how it looks in php and how to identify exploits. Then showed what a sql injection looks like when passed to the server. I didn’t stop there, we broke into gmtoday.com to take a look at the news paper, then used a google dork to pwn a few more logins. I also talked about dc414’s new badge program project, more on this later, and announced dc414’s new year eve party! More on this later as well.

dw5304 finished off the presentations with a killer demonstration of just how weak time warners security is. He showed us how to take complete control of one of their cable modems with just a few requests, even how to build your own private proxy network made out of time warner modems! Then to top it off demoed a never ending DoS on a modem, kicking this client off line for as long as he wished!

Other then the normal junk i bring to give away, ngharo donated a portable dvd player for cars and F4r4d4y donated a arduino “thanx guys”. All of which went to a good home. Here are some pics cmoney took at the meeting “thanx cmoney”, and a big congrats to Castor for winning the anti-M$ poster and pantsme on snagging the arduino!

Castor and his winnings: 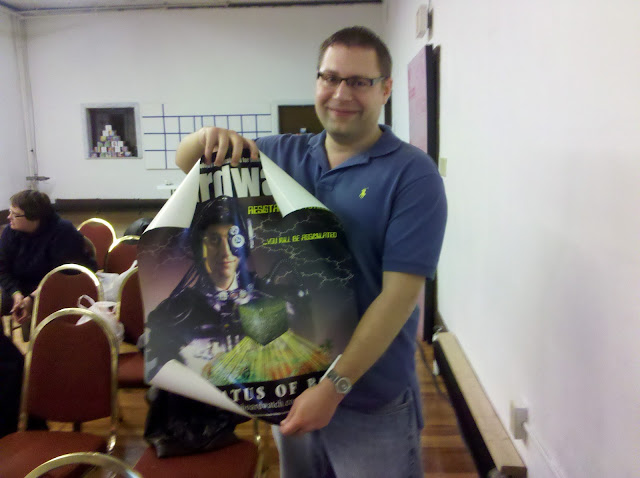